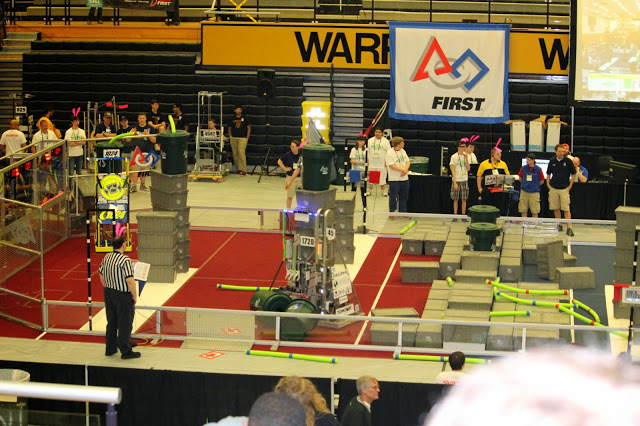 We didn’t really start to realize this year was different until we got to our second competition in Kokomo. For the first time in my memory we were not only easily hold a spot in the top 8 during qualifications but we were fighting neck and neck for first place. We didn’t win at Kokomo, but we more than qualified to go to State Championships. We qualified in the top ten teams in Indiana.﻿﻿﻿

At State, our good fortunes continued. New robot upgrades and two competitions worth of practice paid off as we found ourselves easily holding the top 8 again and contemplating the possibility of being picked by the number one alliance captain. Still though, it didn’t seem real that we were going to St. Louis until they called our name and I went down to the field to get my picture taken with the other team representatives. We were going to Worlds. And I wasn’t day dreaming this time.

The competition was in just a couple of weeks. We needed money, organization, and did
I mention money? We had pulled together as a team to raise more than enough to go to
State but World’s was another matter. Still, I don’t think anyone was very worried. The
common opinion among everyone was that if money was the only thing standing in our
way we would do anything necessary to raise it and that was that.
The entire couple of weeks leading up to World’s was a blur. We did everything from buying a trailer and decorating it with custom vinyl graphics to writing a team “Bible” which every mentor would have a copy
of for rules and general team information. We also owe a big thank you Tony Soverns and Scott Ray, mentors on team 447 out of Anderson who came to speak to our team about what we needed to know once we got to Worlds.

The morning of Wednesday April 22nd, we loaded everything up on a truly massive double decker bus and set off down the highway. On the bus we played cards, video games, and even got to hear stories from our head mentor, Mike Koch, who spoke about his life experiences that brought him to be where he is today. Then, in just short five hours, we entered St. Louis.

Part 1 “The Senior in St. Louis
Part 3 “The Fields of Science”