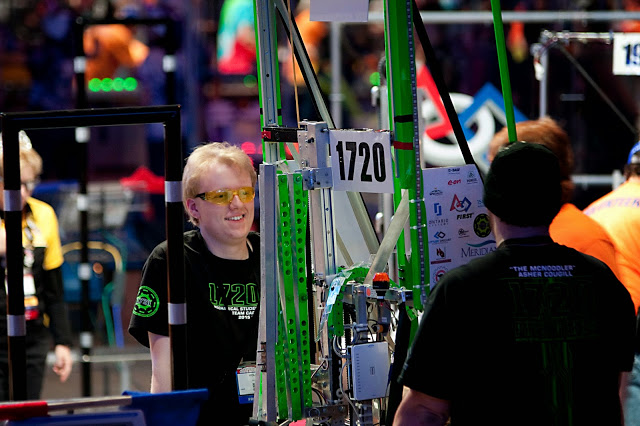 Three weeks ago today our team was getting ready to go to the FIRST Robotics Competition World Championships in St. Louis Missouri. We would be gone for four days, three nights, and experience what would be a once in a lifetime event for me. My name is Ryan Spangler, I am a senior this year and so this is my last year in FIRST. I also happen to be the driver of our robot this year. When my team asked me to write this blog post summing up what it was like to be at the World Championship, it took some time. This year was significant for me in several different ways and I wanted to do it justice. In fact, I spent a good deal of my down time at competition just trying to figure out exactly how I was going to describe something as big and as amazing as this event to everyone back home. I guess we’ll see how I do.

Up to this point, the World Championship was something that students might hear about in passing during their first years on the team but wouldn’t really give much more thought other than just that it existed. It always seemed like a dream that was so far removed from the level at which our team competed as to be unachievable. Maybe in ten, twenty years our team would get good enough to go to St. Louis. We weren’t being pessimistic.Going to the World Championships for us seemed about as likely as a high school football team winning a shot to play in the Super Bowl. But, something changed this year. I’d like to say that it was obvious from the start and our team had this amazing build season where everything went right and our robot was perfect from the get go, but that isn’t how it works. FRC is “the hardest fun you’ll ever have.”

One Comment to “World Championship Series: Part 1 “The Senior in St. Louis””