Today we worked on brackets for the pick up system, the shooter, fighting with destiny, and making rainbow names :3

The shooter is a two wheel system, the frisbee will be in contact with one and then the other.Our pickup system has something to do with black magic because I do not understand how it works o.o 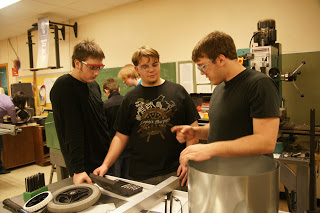 The fight with destiny was long and intense, no one was sure who would win and sadly no pictures were taken due to it being to epically awesome for your eyes.

Then the rainbow names are rainbowy in there weird rainboweness way,also the pizza hut regulations were broke due to a non-employee wearing one of their hats on backwards. 😀

So mistakes were made and stuff in this parallel universe was corrected. so we will battle on… BATTLE ON MY WARRIORS!-Ashley and AnnaDocumenters of the war >.<